LOAD FREQUENCY CONTROL: WHY IS IT NEEDED?

There are a number of ways one can adopt to generate electricity. It can be generated using:

In this article, we would be concentrating on the functioning of a Thermal Power Plant and how the frequency for the system powered by this power plant is controlled.

In thermal power plants, heat energy is converted into electric energy. The basic process that goes on is: Water is heated that results in the production of steam. The steam that is produced is injected to push the turbine that is mechanically coupled to a generator and in turn, a voltage is obtained at its terminals. After this process, the steam is then condensed back to liquid state with the help of a condenser and recycled to repeat the process. This process is known as the Rankine Cycle.

There are many types of Thermal Power Plants: 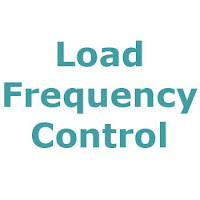 Now, we have seen what a thermal power plant is and what processes are going on inside it. Next, we shall learn the method adopted to control the intake of steam in order to control the terminal voltage generated by the generator.

The electric power generated by the electric generator is transmitted via transmission lines and then is supplied to various Load centers. The generator normally used is known as an Alternator or Synchronous Generator.

The power generated is then transmitted to the load centers. These Load centers constitute houses, industries, hospitals, and so on. One might know that these load centers have demands. But, these demands, vary with time and never remains constant. Thus load connected to a power system network is a variable parameter.

In conclusion, we state that Change in load (demands), leads to a change in input power.

One must notice that when the input to these load centers changes, it in turn indicates that the power generated by the generator must change.

From the basic equation of machines,

As a result, when the speed increases, the frequency also increases.

But this is not acceptable, as certain points need to be noted:


If the frequency decreases, it leads to an increase in flux that may result in saturation of the core.

Thus, change in frequency leads to a lot of problems to the network. Hence, we adopt the method called the LOAD FREQUENCY CONTROL to maintain the frequency of the system at its rated value (as required by the Country’s Electricity Rules).

Author: Vaishnav Chathayil is pursuing his B.Tech. in Electrical and Electronics engineering at National Institute of Technology, Calicut.