It is obvious that if overhead power lines are not properly insulated from their support poles/towers, the current will flow towards the ground through the poles/towers which also become hazardous. Of course, the power line won't even work in that case! Hence, overhead power lines are always supported on insulators mounted on their support poles/towers.
Overhead line insulators should have the following properties:
Most commonly used material for overhead line insulators is porcelain. But glass, steatite and some other special composite material may also be used sometimes.

For the successful operation of power lines, proper selection of insulators is very essential. There are several types of overhead line insulators. Most commonly used types are

Pin type insulators or pin insulators are popularly used in electric distribution systems up to 33 kV voltage level. They are secured on the cross arms of the pole to carry power lines. There is a groove on the upper end of a pin insulator for housing the conductor. Conductor wire is passed through this groove and secured by binding with the same wire as of conductor. 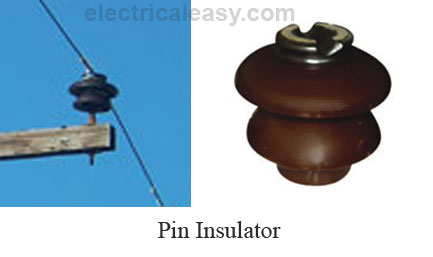 A pin insulator is usually made from porcelain, but glass or plastic may also be used in some cases. As pin insulators are almost always employed in open air, proper insulation while raining is also an important consideration. A wet pin insulator may provide a path for current to flow towards the pole. To overcome this problem, pin insulators are designed with rain sheds or petticoats. Beyond operating voltage of 33kV, pin insulators become too bulky and uneconomical. 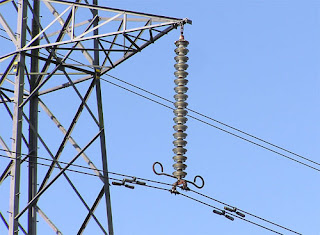