As we saw earlier in the construction of Underground cables, a cable is basically a set of one (or three) conductors surrounded by a metallic sheath. This arrangement can be considered as a set of two long, coaxial, cylinders, separated by insulation. The current carrying conductor forms the inner cylinder while the metallic sheath acts as the outer cylinder. The sheath is grounded, and hence voltage difference appears across the cylinders. The dielectric fills the space between the charged plates (cylinders), making it a capacitor. Hence, capacitance of the cable becomes a very important aspect, and must be calculated.


We can broadly classify cables as single-cored and three-cored. And the calculation of capacitance is different for both.

A single core cable can be represented as shown below. 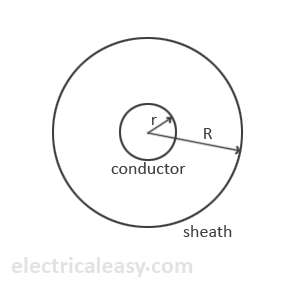 Let,
r = radius of the inner conductor and d = 2r
R = radius of the sheath and D = 2R
ε0 = permittivity of free space = 8.854 x 10-12
εr = relative permittivity of the medium
Consider a cylinder of radius x meters and axial length 1 meter. x be such that, r < x < R.
Now, electric intensity Ex at any point P on the considered cylinder is given as shown in the following equations.
Then, the potential difference between the conductor and sheath is V, as calculated in equations below.
After that, capacitance of the cable can be calculated as C= Q/V 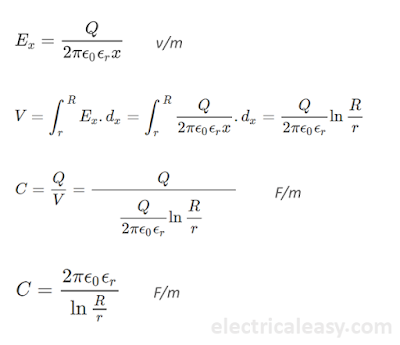 When the capacitance of a cable is known, then its capacitive reactance is given by Xc = 1/(2πfC) Ω.
Then the charging current of the cable can be given as,
Ic= Vph / Xc        A

In the above figure (ii), the three Cc (core to core capacitance) are delta connected and the core to sheath capacitance Cs are star connected due to the sheath forming a single point N. The circuit in figure (ii) can be simplified as shown in figure (iii). Outer points A, B and C represent cable cores and the point N represents the sheath (shown at the middle for simplification of the circuit).
Therefore, the whole three core cable is equivalent to three star connected capacitors each of capacitance Cs + 3Cc as shown in fig. (iii).
The charging current can be given as,
Ic = 2πf(Cs+3Cc)Vph      A


Measurement of Cs and Cc

In order to calculate Cs and Cc we perform various experiments like:


Effects of capacitance in underground cables

The most important factor that is affected by this is the Ferranti effect. It is more pronounced in cables than in lines. This induces several limitations.
Also, with increased capacitance, the charging current drawn is also increased. Underground cables have 20 to 75 times the line charging current compared to Overhead lines.
Due to these two conditions, the length of Underground cables is limited.