String efficiency of suspension insulators and methods of improving it 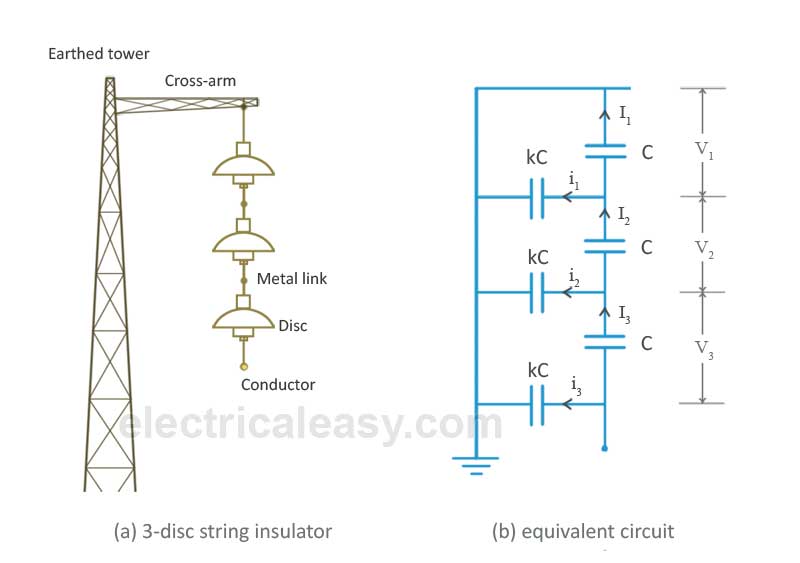 From the above equivalent circuit, applying Kirchoff's current law to node A,

Now, voltage between the conductor and the earther tower is,

As explained above, voltage is not uniformly distributed over a suspension insulator string. The disc nearest to the conductor has maximum voltage across it and, hence, it will be under maximum electrical stress. Due to this, the disc nearest to the conductor is likely to be punctured and subsequently, other discs may puncture successively. Therefore, this unequal voltage distribution is undesirable and usually expressed in terms of string efficiency.

In this method, voltage across each disc can be equailized by using discs with different capacitances. For equalizing the voltage distribution, the top unit of the string must have minimum capacitance, while the disc nearest to the conductor must have maximum capacitance. The insulator discs of different dimensions are so chosen that the each disc has a different capacitance. They are arranged in such a way that the capacitance increases progressively towards the bottom. As voltage is inversely proportional to capacitance, this method tends to equalize the voltage distribution across each disc.


(iii) By using a guard or grading ring

A guard ring or grading ring is basically a metal ring which is electrically connected to the conductor surrounding the bottom unit of the string insulator. The guard ring introduces capacitance between metal links and the line conductor which tends to cancel out the shunt capacitances. As a result, nearly same charging current flows through each disc and, hence, improving the string efficiecy. Grading rings are sometimes similar to corona rings, but they encircle insulators rather than conductors.