Copper was the preferred material for overhead conductors in earlier days, but, aluminium has replaced copper because of the much lower cost and lighter weight of the aluminium conductor compared with a copper conductor of the same resistance. Following are some materials that are considered to be good conductors.

As it is already mentioned above, aluminium conductors have an edge over copper conductors considering combined factors of cost, conductivity, tensile strength, weight etc. Aluminium conductors have completely replaced copper conductors in overhead power lines because of their lower cost and lower weight. Though an aluminium conductor has larger diameter than that of a copper conductor of same resistance, this is actually an advantage when 'Corona' is taken into consideration. Corona reduces considerably with increase in the conductor diameter. Following are four common types of overhead conductors used for overhead transmission and distribution to carry generated power from generating stations to the end users.
Generally, all types of conductors are in stranded form in order to increase the flexibility. Solid wires, except for very small cross sectional area, are very difficult to handle and, also, they tend to crystallize at the point of support because of swinging in winds.

This type is sometimes also referred as ASC (Aluminium Stranded Conductor). It is made up of strands of EC grade or Electrical Conductor grade aluminium. AAC conductor has conductivity about 61% IACS (International Annealed Copper Standard). Despite having a good conductivity, because of its relatively poor strength, AAC has limited use in transmission and rural distribution lines. However, AAC can be seen in urban areas for distribution where spans are usually short but higher conductivity is required.

These conductors are made from aluminium alloy 6201 which is a high strength Aluminium-Magnesium-Silicon alloy. This alloy conductor offers good electrical conductivity (about 52.5% IACS) with better mechanical strength. Because of AAAC's lighter weight as compared to ACSR of equal strength and current capacity, AAAC may be used for distribution purposes. However, it is not usually preferred for transmission. Also, AAAC conductors can be employed in coastal areas because of their excellent corrosion resistance. 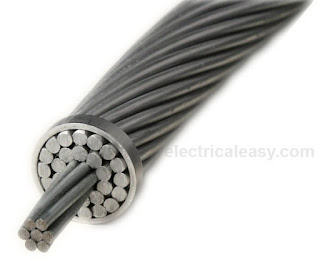 ACSR consists of a solid or stranded steel core with one or more layers of high purity aluminium (aluminium 1350) wires wrapped in spiral. The core wires may be zinc coated (galvanized) steel or aluminium coated (aluminized) steel. Galvanization or aluminization coatings are thin and are applied to protect the steel from corrosion. The central steel core provides additional mechanical strength and, hence, sag is significantly less than all other aluminium conductors. ACSR conductors are available in a wide range of steel content - from 6% to 40%. ACSR with higher steel content is selected where higher mechanical strength is required, such as river crossing. ASCR conductors are very widely used for all transmission and distribution purposes. 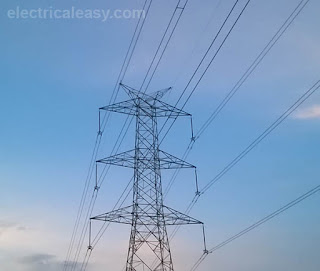 Transmission at extra high voltages (say above 220 kV) poses some problems such as significant corona loss and excessive interference with nearby communication lines when only one conductor per phase is used. This is because, at EHV level, the electric field gradient at the surface of a single conductor is high enough to ionize the surrounding air which causes corona loss and interference problems. The electric field gradient can be reduced significantly by employing two or more conductors per phase in close proximity. Two or more conductors per phase are connected at intervals by spacers and are called as bundled conductors. The image at right shows two conductors in bundled form per phase. Number of conductors in a bundled conductor is greater for higher voltages.